The first lesson I learned was to never take public transportation to an interview. Your bus will have a broken alternator belt and be delayed more than a half an hour. Then your red line train will, of course, be delayed another half an hour or so because it gets stuck behind a disabled train. And to top it off when you transfer to the green line you will, naturally, be so stressed and frazzled that you’ll end up getting on the wrong train and have to back track (I have no excuse for this one, I mean the trains are clearly labeled, yet somehow I hopped onto the D train instead of the B).

The second thing I learned was that Beans on Toast, aka Jay, is one of the coolest people I’ve ever met. Playing gigs is what Jay was meant to do. He’s a people person, equally at ease meeting new people and hanging out with old friends. He’ll buy you a drink without even thinking twice about it, that’s just the kind of guy he is. Tipping baffles him, at least when it comes to tipping in America that is. His confusion can be explained by the fact that he’s a long way from home; Jay is the man behind Beans on Toast, a British musician who somewhat jokingly calls himself a drunken folk singer. He’s put out five albums to date, the most recent of which, Giving Everything, was released just last December. This is first proper US tour as a headliner, and I got the chance to meet him when he kicked off the tour in Boston last week. 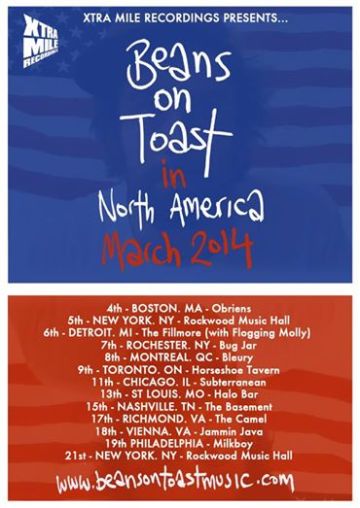 When I finally got to the pub and introduced myself to Jay, a full two and a half hours after I was originally supposed to meet him, the first thing he said to me was “you’re late!” He then followed up with “if the girl who emailed me because she wanted to interview me was late I was worried no one was going to show up!” The show was at O’Briens, a small pub located in Alston, and was an ideal location for the show. The crowd was small but loyal, singing along to old and new songs alike. Jay’s set was informal and felt more like a living room show than anything. Ditching his shoes and socks, Jay instantly made himself at home on stage. There was no planned set list, and Jay asked the crowd several times if they had any requests, prompting him to play M.D.M.Amazing and an older song that he forgot the words to and gave up on halfway through. His set was interspersed with hilarious anecdotes and made up words, keeping the crowd in stitches for most of the show. 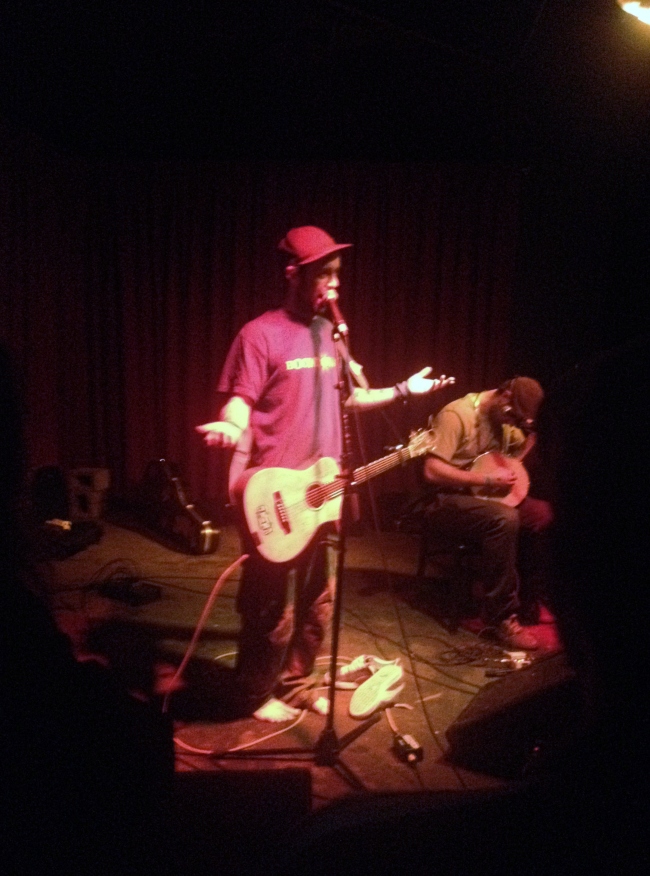 Afterwards I got a chance to chat with Jay for a bit. At one point I asked him to tell me a little bit about his first album, Standing on a Chair, which is a fifty song record and has guest vocals from Emmy the Great, Frank Turner, the Holloways, and Mumford and Songs, among others. Jay revealed that doing a record in the first place had never really been his intention. “I was touring at the time and my label approached me about doing an album. I said I wanted to do a double CD, that was the only thing I wanted and they came back and said it wasn’t going to make any money.” Jay pauses for a second, before laughing, “and they were right; it loses money every day.” Jay didn’t seem to be too upset by the idea though. Playing shows is what he loves to do most, and as long as a couple of people show up each night he’s happy to play for them.

Seeing Jay perform and seeing how much he loves what he does was truly an inspiring experience. What matters most in life is that you love what you do and I can’t think of anyone who embodies this spirit better than Jay.

You can check Jay while he tours the US for the remainder of March before heading home to England.

Also be sure to check out his latest record, Giving Everything, available now on iTunes or through XtraMile Recordings.

Tagged as beans on toast, boston, giving everything, o'briens pub

Today’s song choice was inspired by the article on Beans on Toast that I should already have written by now but will probably end up finishing in the early hours Wednesday morning right before I post it. “Things” is off of Jay’s fifth and latest album, Giving Everything, and if you’ve ever heard me mention Beans on Toast before and wondered who the heck it was that I was listening to, well, here you go. This is Jay at his finest.